There was a time when I used three monitors. It was awesome. One had my code, the second dedicated to Photoshop, and the third only ever displayed my browser. This setup allowed me to rarely need to swap windows or move anything around and it felt like it helped me work quickly. Three monitors is a lot though and over time I've migrated to using a laptop 100% of the time, many of which don't support two external screens. I became adjusted and there were even stints of time I used only the laptop monitor. I'm back to two now, but honestly it always feels awkward and I miss having that three monitor setup.

Until recently I went so far as to have a portrait-oriented external monitor to get what I viewed as the best of both worlds with a browser maximized: a realistic viewport along with a fully displayed Web Inspector. I thought it was great, but it was tiring literally having to tilt my head up and down to see what changes I was making take shape.

I've learned that widescreen is such a hit for good reason, but doesn't cater very well to working large amounts of time in Web Inspector because your viewport is quite short, so many people have opted to dock it to the right. That's got it's own problem, as outlined in the above linked post. What's great though is that it appears to be a problem undergoing a solution. Looking forward to this: 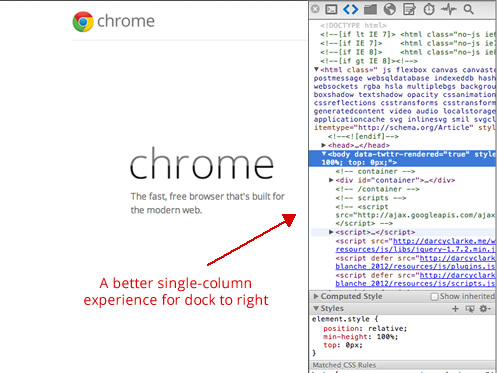 I still think I might go back to three monitors but knowing the right-side docking problem is nearly solved I'm psyched about the premise.