Adobe has published a really extensive piece surrounding the details behind Fireworks CS5. I’ve talked about it with a few designers, both Fireworks and Photoshop users, and had a gut feeling that it would be mostly a bugfix release. While every Adobe product under the sun needs at least one full version release consisting of mostly bugfixes, I gladly welcome Fireworks CS5. The fixes mentioned in the piece have me really excited to put more time into working with the application after it’s released.

There are a few things that stick out to me as a big deal. I’ll start off by dismissing what I really don’t care about and would honestly prefer not to be there: integration with Creative Suite is not something I actively look for and could do without. I’ve got no interest in Flash Catalyst no matter how hard Adobe shoves it down our throat, and while Device Central has a smidgen of potential for being partially useful, I bet I’ll never run it. On to the goods:

I find it hard not to smile a bit about each line item here. While we take numbers like 900 and 110 with a grain of salt, every little bit counts. I especially like the sound of the recovered files feature (sorry Windows users, but wasn’t it “time” quite a bit ago?) as even with constant saving, Fireworks has a tendency to feel a bit shaky with every beachball.

I’ll believe the performance boosts when I see them, but the sluggishness was always the first thing to come up as a gripe when showing people how I use Fireworks.

It stinks that we’re still dealing with the text shifting issues that grossly plagued the initial release of CS4 (how that made it to market in the first place I have no idea) it sounds like they put a lot of effort into doing as much as possible to resolve it; great news.

One of the many core reasons I prefer Fireworks is the focus on pixel measurements, to hear that it’s a flagship feature for CS5 has me giddy.

I’m quite happy about the inclusion of ASE support: 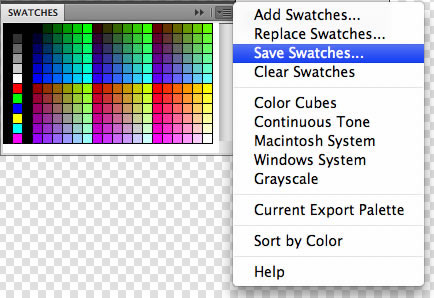 Working with stored swatches is something I can see myself using to save a quite a bit of time and improve overall consistency. Bring it on.

From what I’ve read, it sounds like Adobe spent a decent amount of time improving UI across the entire Creative Suite. That’s great for everyone. Personally I don’t find Adobe applications disgusting to work with by any means, but there is extensive room for improvement in the consistency department, especially when it comes to Fireworks.

It looks like we’ll have even more control over type in Fireworks CS5, thank goodness. I’ve become frustrated with the quirkiness of working with kerning and tracking in Fireworks even on the level of moving the sliders around. Many times Fireworks will opt to work with only even or only odd numbers, not very conducive to fine grained detail control.

Features like these should help with the comp revision process as client approval is obtained.

While all of this sounds great, I’m still focusing on Acorn on being my go-to design application. Guides are in the latest beta: check. As soon as layer styles find their way in, it’s going to be extremely difficult for me to find good reason to stick with Fireworks primarily.