I’m wicked excited to be writing this post, I’ve been clamoring to get this update out the door. I’ve spent quite a bit of time working on Attachments not only for the 3.0 rewrite but also in the time since. I’ve received a ton of great user feedback and suggestions and I’m happy to say that a number of the most requested updates have been included in Attachments 3.5, available now. The features added can be found in their entirety in the changelog, but the highlights are as follows:

Limit the number of Attachments
While I was hoping to integrate this feature as tightly as possible, I’ve got some more digging around Backbone to pick apart how to generate UI feedback earlier in the process, but you can now limit the number of Attachments per Instance
Attachments Pro Migration
If you’re a user of Attachments Pro but have been wanting to make the move to Attachments, today is your day! Attachments Pro is now supported in the migration process found in the Settings menu. Please back up your database before running the script!
Change Attachment Asset
You can now update an Attachment asset (e.g. just update the image file) instead of having to remove the entire Attachment and re-add one with your new asset.
Fine Grained Placement Control
Have you ever wanted your Instance to show up only on your Home page because it’s only responsible for a slideshow on that page? Using this new filter you can explicitly state any number of criteria for displaying (or hiding) your Instance meta box.
Extension support
Attachments has added a couple new hooks that should help you write your own extensions.
Attachments UI
The additions to Attachments 3.5 make possible the first official Attachments extension: Attachments UI!

Keep an eye on GitHub as I’m going to be spending time elaborating on and tidying up the documentation. It’s grown to a state that it could use some updates, so I’ll be focusing on that in the short term.

I hope Attachments users enjoy the updates, I’ve got a number of other enhancements in the works for the plugin and greatly appreciate the user feedback I’ve been receiving! I’ve also started working on some Members-only Attachments Extensions, the first of which is available today!

While intentionally designed to be code-focused, most of the questions I get from people revolve around the fact that Attachments basically has no user interface. I understand why many people are tripped up on it, as the common practice with WordPress plugins is to provide an interface for as much functionality as makes sense. Personally though, I’ve been preferential to the code-focused approach for a number of reasons. The primary reason I built Attachments to be code-focused was to be able to more easily keep the configuration details in version control. When the settings for a plugin are abstracted to the database, it’s one more thing you need to keep in mind. I realize that the chances of moving a site without moving the database are slim to none, but I like the approach from a stability standpoint. 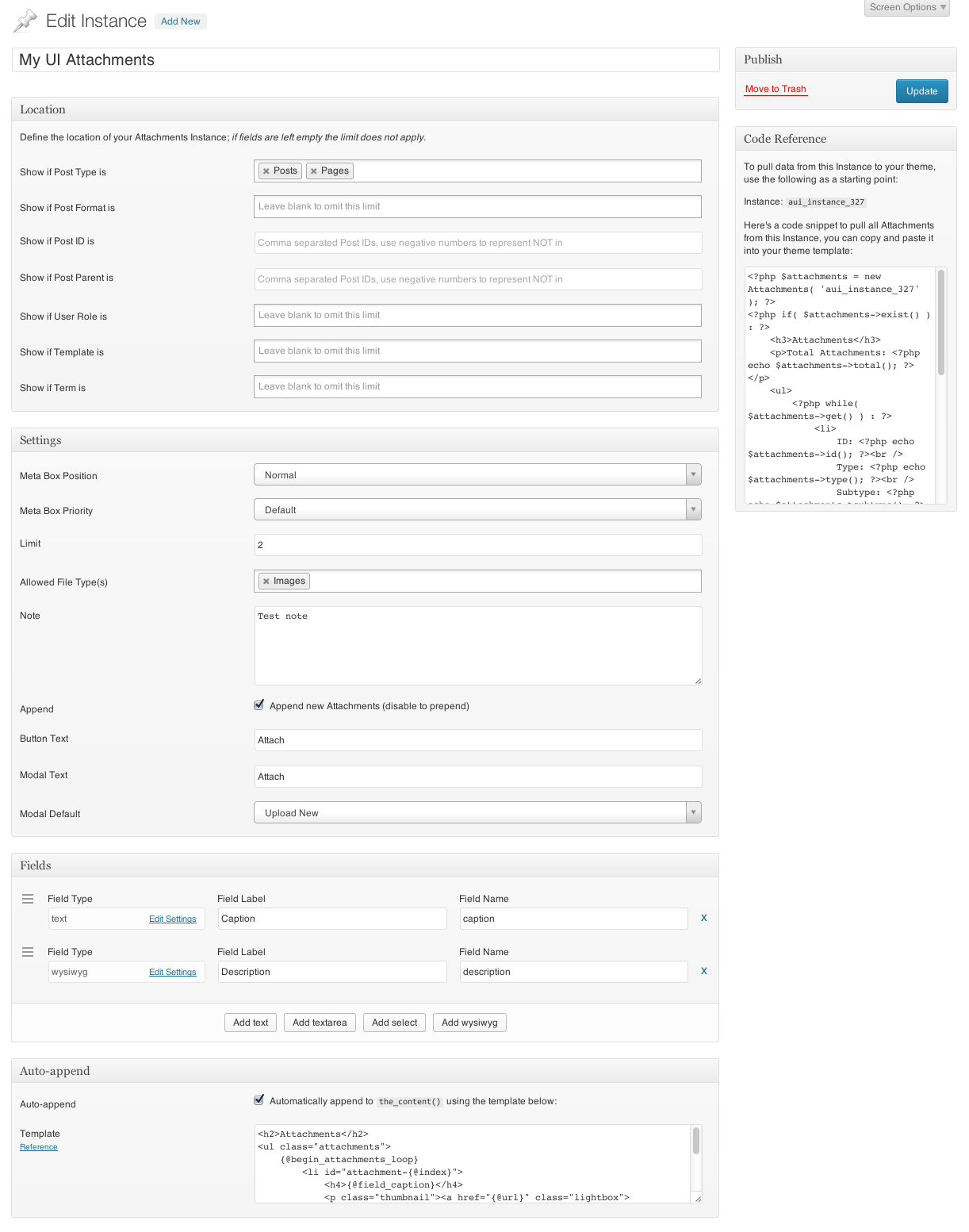 The main calling to Attachments UI is the ability to create Instances without writing a line of code. While that one-to-one feature relationship would have been just fine, Attachments UI adds a few things specific to the extension itself that should hopefully make your life easier.

Location Limits
Attachments UI makes it really easy to limit your Instance location using attributes such as Post ID, Post Parent ID, Post Format, User Role, Page Template, and Taxonomy Term. Using these filters you can fine-tune which edit screens your meta boxes show up on.
Auto-append
One of the features Attachments Pro users liked quite a bit was the ability to auto-append Attachments data to the_content() and Attachments UI brings that back. Using the easy to understand template variables, you can fully implement Attachments without editing a single line of your theme code.
Starter Code Sample
If you’d prefer to not auto-append you’re provided a code sample custom tailored to your Instance in Attachments UI

I’m quite happy with how the plugin turned out, and I hope Attachments Pro users find the territory not only familiar, but even better than it was before.

Attachments UI is the first Monday By Noon Members-only WordPress plugin and is available now. If you’re a current Member you can log in and download the plugin right now. If you’re not a Member, you can sign up now and get access to Attachments UI, future plugins, priority support, and more today.