Attachments Pro 2.4.3 has just been released, and with it comes a new field type as well as a beta migration script that will allow you to migrate your Attachments data to an Attachments Pro instance. I’m happy to bring these two often requested features to fruition, and I hope you enjoy them!

An often requested feature was the ability to have a WYSIWYG field type for Attachments Pro. With the advent of the_editor() we’re finally able to make use of the sometimes unwieldy customized instance of TinyMCE that WordPress uses. 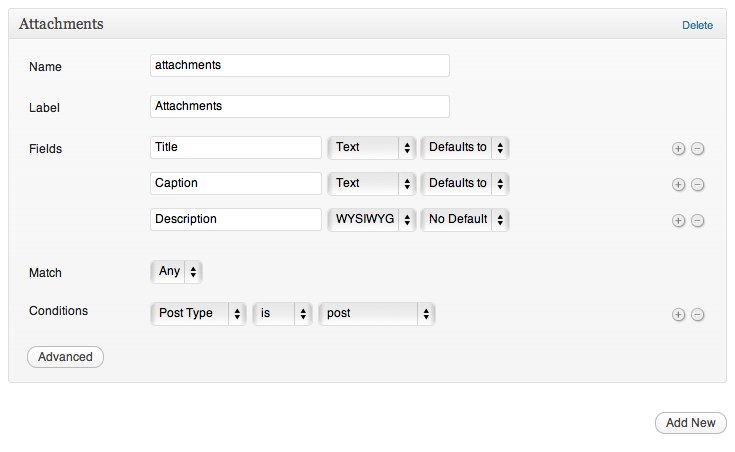 As it went, I didn’t make use of wp_editor() at all and instead did things by hand since Attachments Pro dynamically creates/destroys instances of TinyMCE but beyond that, there is a lot going on behind the scenes to get the editor up and running. To keep a long story short, Attachments Pro will instantiate TinyMCE field types even when the post at hand doesn’t have a default editor. That often causes trouble with plugins that depend on the main content editor being present but Attachments Pro should survive even if that’s not the case. Testing is more than welcome in that regard, as there are a number of edge cases to account for.

I questioned whether or not I should have included this feature for the initial release, but decided against it. One of the nice things was the fact that Attachments and Attachments Pro are interoperable, they can both be active at the same time. That said, if someone had been using Attachments on a project but wanted to upgrade to Attachments Pro, they could do so by leaving Attachments (and their theme customizations) as is, and progressively enhance with Attachments Pro.

Recently I received an influx of questions asking how to migrate the data from Attachments to Attachments Pro so I sought out to build a migration script, and it’s included and available as a beta in Attachments 2.4. I’d really love to have some testers of the script, but if you’re going to test the migration I can’t stress enough how important it is to back up your database first. This time, the ‘beta’ label means it. 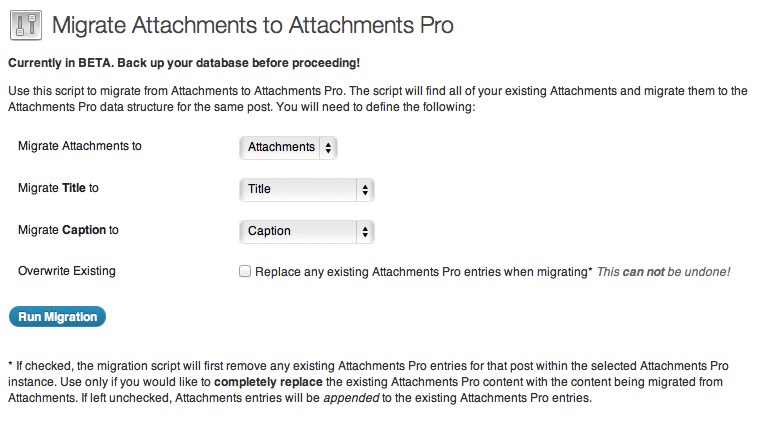 If you’ve been waiting to move from Attachments to Attachments Pro, I hope this migration tool makes it easier for you!

I’m receiving great feature requests on a fairly consistent basis and I really appreciate that, it really helps me prioritize what needs to be done next as I take care of any bugs along the way. The next new feature I’m going to start working on is another new field type: thumbnail.

A number of people are using Attachments Pro to populate videos, documents, and other non-image files (which were the original inspiration for Attachments) but finding it frustrating to not be able to have a thumbnail image for each resource. I sympathize with that and see it as a valuable addition, so I’m going to start planning the integration of that field type.

If you haven’t checked out Attachments Pro yet, please do so, I’d love to hear how you’re using it!