There’s a lot more to Ajax than the buzzword it has become recently. It has generated some serious usability and accessibility discussion to go along with all of the innovative applications it’s been involved with. Bulletproof Ajax by Jeremy Keith aims to start you off right with best practices surrounding this new technique. 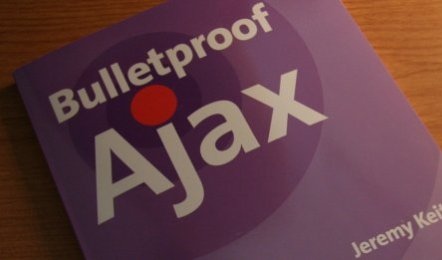 I’m a big fan of Jeremy Keith’s writing style. If you’ve read DOM Scripting, you’ll notice a similarity in Bulletproof Ajax. Again, an example is constantly revised, implementing the subject matter of each chapter. I think it’s a great way to illustrate improvements being made.

The first chapter of Bulletproof Ajax goes into detail about the origins of Ajax. Jeremy Keith explains that Ajax has come a long way since it’s introduction, and details some of the people behind it.

Chapter 2 is (more or less) an extremely streamlined, stripped-down version of DOM Scripting. A very light introduction to JavaScript and DOM scripting gives a reader enough of an introduction to carry themselves through the rest of the book without becoming lost.

XMLHttpRequest is introduced next with a simple and straightforward example using Ajax to pull the contents of a plain text file. The details of what actually takes place during a XMLHttpRequest are brought to light in Chapter 3. The idea of writing Bulletproof Ajax is introduced, reinforcing its importance early in the book.

In Chapter 4, the various return data types involved in XMLHttpRequest are discussed, including the advantages and disadvantages associated with each. Between XML, JSON, and HTML, Jeremy discusses how each is used and helps you to decide which is most applicable for your project.

Hijax: The Secret of Your Success

Bulletproof Ajax revolves around the idea of Hijax, Jeremy’s innovative way of applying the idea of progressive enhancement to Ajax applications. Hijax is constantly referred to throughout the book, and I think it’s a great concept for developers to keep in mind.

Much of the conversation (controversy) surrounding Ajax has to do with the accessibility and usability implications that come along with it. The next chapter of the book talks about the visual aids that are required to ensure a usable document. A major issue discussed in the chapter includes Ajax interfering with the ability to bookmark altered documents. I think Jeremy hit the nail on the head when he wrote:

“If you are updating so much of the page that your users believe they have moved to a new page, you are probably doing too much.”

The next chapter continues focus on accessibility issues associated with Ajax application. I think it’s great that this much attention was given to such an important aspect of the technology throughout the book, as it inherits a great deal of importance given its popularity. Screen reader implications are the topic of focus for Chapter 7.

Finishing things up with a final project

All of the material discussed in the book results in a culmination of a book rating system tied in with a (checkout-less) shopping cart. The example is explained in great depth, constantly revisiting Jeremy’s Hijax techniques, giving readers really solid instructions to produce Bulletproof Ajax.

The final chapter discusses the future of Ajax application. Some popular JavaScript libraries are listed along with details regarding what sets them apart from one another. Jeremy finished well when he wrote:

I think Bulletproof Ajax by Jeremy Keith is a great resource to have on your bookshelf. It will prove to be especially helpful to those who are just starting to take an interest in Ajax, but also a good read for seasoned developers.