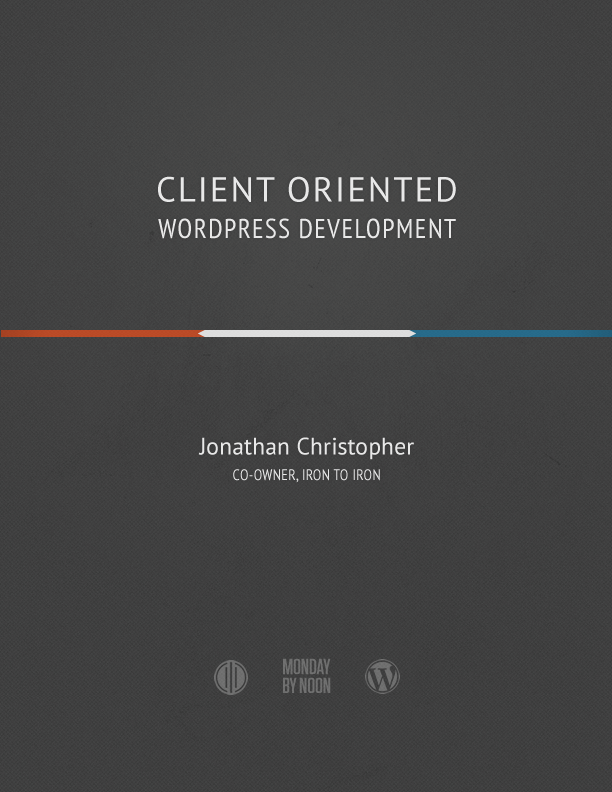 I’m not really sure how to intro this post so I’ll cut to the chase: I’ve written a book. It’s about WordPress and how to best use it when working with clients. It’s more than that though. There’s a backstory to it, so I think that’s an appropriate place to start.

If you work with clients and WordPress and have been interested in what I have to say about the two: this book is for you. I’d love to hear what you think about it if you’d like to check it out. The process has been very new for me, and I’d love to give a brief overview of how things came to be and how the project went as a whole.

I sometimes get lofty goals, things I think about that I’d hope to do some day but kind of let them sit there until it feels right to take the next steps. Talking about lofty things is not part of my character though, so these ideas stay pretty well locked up. Sometimes they don’t see the light of day for years, if at all.

Starting Monday By Noon unlocked something for me. I got a kick out of writing, something I never really took a liking to when I was growing up, at least not actively. It wasn’t that I disliked it per se, I simply didn’t find much enjoyment in it. Through school I’d often wait until the last minute to do just about everything when it came to writing assignments, as I didn’t take much pleasure in it. Writing at Monday By Noon was different though. It posed the challenge of putting my personal spin on the way technology can be discussed, in particular Web design and development. I enjoyed blending in what I saw as the appropriate levels of education, opinion, and prediction. I’ve been hooked for a long time.

I decided then to add ‘write a book’ to my lofty list and see what came of it. Immediately I knew I didn’t have a topic that could form into anything worthwhile, so I let it simmer for a while. That was three or four years ago, so long ago in fact I’ve lost track of the details to be honest. The task sat there dormant, waiting for inspiration to strike. And I waited.

I can remember the night I committed to myself that I was going to pull the trigger on this project and get it started. It was the day Hierarchy was released. My mind had been primed by Jonathan Snook’s release of SMACSS and I was blindsided by something under my nose the whole time: self publishing. I’ve been a huge proponent of self publishing ever since ebooks became widely adopted, but it never trickled down to my thinking it was something I could take advantage of.

The combination of the conversation taking place behind Hierarchy and the timing of my reading SMACSS resulted in a light bulb coming to life. I finally had a book topic. Time and time again I would try to convey my approaches on a more detailed level but would always run out of time or stumble over my explanations. A book would be different, it would accomplish that goal.

I did what I could to try and explain the topic to my wife, and I could tell that by her reaction she was feeding off what I was feeling. That was a springboard, without a doubt. I thought about the topic a bit more, to try and get some more meat on it. I pitched the idea to a good friend, someone I trust to provide me with honest feedback and let me know when an idea I’m thrilled about likely won’t make sense the next morning. He liked the idea and thought something good would come of it. Immediately that night I wrote out the initial chapter outline for what would become Client Oriented WordPress Development.

I still remember sitting in this very seat molding that outline. It’s funny to think about how different it came out in the end, but I really felt like I was on to something. I felt this book would be something people would find useful, and it’s a topic I’ve been dying to get written out for so very long. At the same time, it took those extra years for me to finalize the concepts I planned to discuss in the book. I’m glad I waited.

From that night on January 5th, I worked on this project in my spare time for the past three months, completely brain dumping everything I’ve wanted to cover on the topic. I’ve never written in long form before and I approached the writing process in what I can only imagine as being “wrong”, but that wasn’t the point. I needed to see if this was something I could work through over a long amount of time. I’ve become accustomed to writing articles on Monday By Noon, but they were single ideas covering a smaller topic at a time. A book was something different.

That was my first struggle; continuity. I didn’t have it as I was writing the first few chapters. I could already tell things felt convoluted and I quickly became discouraged. I’d take short breaks for a few days and try to get my mind around the task at hand, then I’d try again. I must admit it was a struggle throughout the entire book and a skill I’ll look forward to refining over time.

I learned a lot through writing the book, and did what I could to track my progress on it for personal posterity. I journaled after every writing session and kept track of what I got done and the word count as time went on. There were a number of other pieces to the project that don’t have a word count associated but definitely take a chunk of time. The cover, the website, the many details surrounding various publishing platforms, it’s a lot to make sure you’ve got covered.

All that to say this is one of the more involved projects I’ve ever worked on. Three months of solid work. Over 160 pages and 36,000+ words of content wrapped up into something I’m really proud of and hope others enjoy. In purchasing the book you get access to a customer-only knowledge forum to discuss ideas in more detail, ask for clarity on things, and also report errata throughout the book. Lifetime updates are included with the purchase, as I don’t plan on shelving anything any time soon. The book will undergo revision as a response to feedback I receive, and notifications will be sent out with every update. The book is debuting at an intro price of $13.99 USD for DRM-free PDF, ePub, and Kindle formats. If you’re a Member of Monday By Noon I’d love to offer a coupon code for $5 off the intro price, so please send me a note and let me know if you’re interested.

It wasn’t just me

My involvement in this project was merely slapping down a few keystrokes to get some content written. I wouldn’t have been able to see this thing to completion if it wasn’t for the support of my wife, my friends, and the blessing of energy and focus to make optimal use of off-hours time to get the thing done. This project seemed to be something like a calling to get done and when I felt I was given the go-ahead I leaned heavily on that grace.

My wife Carrie continually encourages me to see these projects through, to take my time and not let them take over my life. I know that I wasn’t being the best husband on the (many) late nights I’d be downstairs writing instead of paying extra attention to her. She supported me through it though, and I can’t thank her enough for that. Carrie helped proofread the entire book and provided amazing feedback, even without having written a line of code or a bit of markup in her entire life. She knows how I work and how I feel about it, she let me know when I could have been more straightforward on talking points. I know that without her being there I likely couldn’t have finished something like this.

I also want to thank a number of friends I requested help from throughout the entire writing process. JR was the guy to validate the idea one night in an instant message and took time out of his busy schedule to entertain my continuous sessions of thinking out loud and spewing the strangest of ideas for the book. I’ve known and worked with JR for years, he was a valuable addition to the production of this book and helped me make sure I wasn’t veering off into left field at various times.

Kevin took his steadfast stance when I let him know I was going to pursue this project: genuine support and backing. He and I have spoken a lot about the topic of book writing and I’m truly thankful to have a business partner that’s so supportive with what’s taking form once we leave the office for the day.

P.J. Onori is someone I’ve long lost track of how I met, but he’s always been a good friend to me. We talk on a consistent basis, but there are times it’ll be a few weeks between us catching up but it always feels like we pick up where we left off. He’s a very talented guy who I feel sticks to his guns when it comes to what he does, and that’s what I like about him. He’s got a style and he’s got a purpose to it. I knew he’d be a great person to ask for a bit of help with idea validation and proofreading and he came through in a big way.

I mentioned the project to a few other people as well, those I knew who did client work and used WordPress and stole some of their valuable time to talk about this idea with them. I’m thankful that they gave me a few minutes and a few opinions and helped me to massage the topics covered into what stands today. Aaron Mahnke, Pat Dryburgh, and Travis Northcutt: thank you guys so much for the encouragement and the feedback, it’s so very appreciated.

So there it is. The cat has left the bag, the building, and the ladies have sung. I’m so excited to have this project finally be out in the wild. I can’t begin to explain the angst it brought me having to wait what felt like an eternity before actually getting the thing out there. This project took a toll but I’m so glad it’s out there. I look forward to hearing feedback and making revisions as time goes on, and I can’t wait to talk to you all about it.