There are plenty of times in every project where CSS3 would save me time and effort, but I still consistently weigh the benefit and cost to implementing CSS3 on any level in a client project.

In some recent discussion I’ve had with other designers, a question that’s come up relates to which pseudo-selectors I find myself using most often. Pseudo-selectors are awesome. When it comes to a healthy blend of saving time and accounting for the smallest of details in design, it’s hard to find something that packs more of a punch than pseudo-selectors. I say that because the selectors allow you to more easily define a very particular element you’re looking to style. Of course this is already possible using a targeted combination of elements, classes, and ids, but pseudo-selectors let you do things dynamically.

Thumbnails listings are awesome. I really like smart designs that incorporate thumbnails because to me it’s the best of both worlds. You’re able to quickly scan a volume of images and easily discern what you’d like to check out first, all the while without a large latency overhead waiting for assets to download. I also like grids. Thumbnail listings are most often a blatant and literal grid so they’re pleasing to my eye.

That said, I’ve engineered the front end of many projects that incorporate thumbnail image galleries, and with a combination of CSS3 and pseudo-selectors, life gets much easier when it comes to implementation. Even if people don’t recognize why, they can tell when something just doesn’t look right. I think it most commonly arises as a result of centering issues; people can most easily tell when something isn’t quite lined up in the middle. While not trivial to spot with a variety of design elements, a grid consisting of square elements is much easier to discern.

Out of the box, you can style a thumbnail gallery with floating list items possessing a certain width/height and specific thumbnail size. What you’ll end up with is an unbalanced group of images: 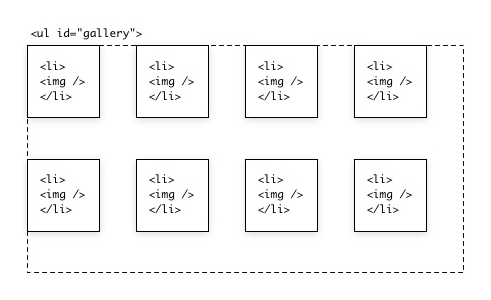 Naturally, everyone has their own way of styling something like this, some will use margins, others padding, we’ll stick with width for this example. The point is, though, that there’s a better way to handle the end result.

We’ve all done it. It very well might be the only time you’ve used the modulus operator in your given server side language. As we’re dumping out the markup for our thumbnails, we’ll tag on either class="first", class="last", and sometimes both if for nothing more than applying a specific style alteration depending on where in the row a thumbnail sits. 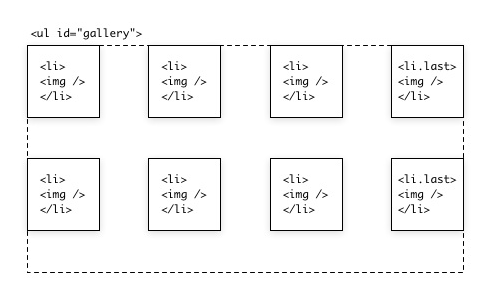 It’s not a terrible solution, but it’s a bit clunky. When we step back and think about it, we’re simply adding these classes for the sake of presentation. While it can be argued that there’s some semantics to it, more often than not it ends up being on a presentational level. Can you truly say that class="last" benefits the document in any way? What happens when the design changes and there are now 5 thumbnails in a row? It’s just one more thing to consider as time goes on.

Pseudo-selectors open the door for elements like thumbnail galleries. With just an additional selector or two you’re able to cut out the extra classes and improve the maintainability of your document all at the same time. The selectors that will be of most use in this case are structural pseudo-selectors. It’s likely that you’ve seen some of these before, but we’ll cover implementation as a replacement for manually adding classes to elements during page load.

What comes in most handy in this situation is the :nth-child pseudo-selector. As defined by the recommendation:

The :nth-child(an+b) pseudo-class notation represents an element that has an+b-1 siblings before it in the document tree, for any positive integer or zero value of n, and has a parent element. For values of a and b greater than zero, this effectively divides the element’s children into groups of a elements (the last group taking the remainder), and selecting the bth element of each group. For example, this allows the selectors to address every other row in a table, and could be used to alternate the color of paragraph text in a cycle of four. The a and b values must be integers (positive, negative, or zero). The index of the first child of an element is 1.

Easy, right? It’s actually not all that bad. What this selector is going to let us do is most closely related to applying a modulus within a loop server side. It’s going to allow the selector to behave arithmetically, which is awesome. In our example, we’re going to use an nth-child selector that will grab every fourth list item and conditionally apply our desired style. 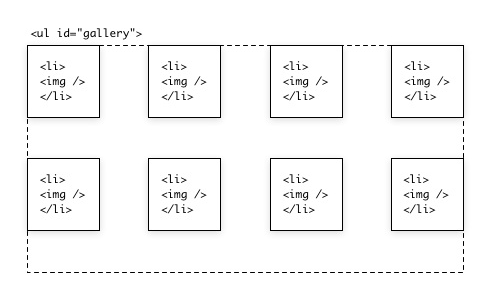 So this is the best of both worlds, right? We’re not injecting unnecessary classes conditionally on the server side, and the rendered result is exactly what we’re looking for. Easy peasy!

Unfortunately, CSS3 is a double edged sword, particularly with client work. If you’re at all concerned about pixel (near) perfection in IE, in any shape or form, you can forget about nth-child().

It’s not the end of the world though. Personally, I would proceed in implementing nth-child() in this case. I’m willing to sacrifice the centering of the thumbnails for IE users, because it’s not a disastrous consequence. Combine that with the ease of implementation, and subsequent ease in maintenance and I’m sold.

It’s up to your discretion, though. If you’re willing to accept that it’s an unknown amount of time before the most popular browser on the face of the Earth will render your thumbnail gallery, go for it. This is just the beginning of nth-child(). I truly suggest you check out the recommendation and become familiar with it. There’s tons of stuff you can do with minimal recoil in substandard browsers.