Defensive Design for the Web Review

Personally, I’m a big fan of the thought process behind Bulletproof Web Design. The idea of creating a design that can withstand virtually any change — within reason — seems great to me. Beyond making your site design bulletproof, you can also do quite a bit defensively as far as usability is concerned. 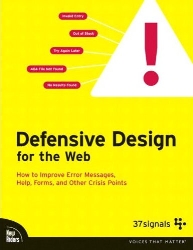 Although this book was written some time ago, it still analyzes some errors that continue to pop up today.

What I Liked About “Defensive Design”

I really like learning by example, and I think “Defensive Design for the Web” made a smart move when it was chosen to include an abundance of examples to support their case. Simply writing about current usability problems is sufficient, but finding real life examples that we’ve all probably run into can really help drive the point home.

Some people may say that the points raised in this book are too obvious to write about. I’d have to disagree. Especially for someone new to Web design and development. Having them read this book could turn out to be quite beneficial later on. Certain pitfalls could be avoided simply by following the provided checklist at the end of the book.

All in all I think Defensive Design for the Web would make a worthy addition to anyone’s library. You can’t beat the price and it could prove to be a nice reference when you need to get back to basics. It would also make a great book to lend to someone just getting into Web design and development. It’s a book that will help newcomers get into habits that will prove to be useful later in time.

One thing that stands out in my mind from reading the book was a point that was brought up regarding confirmation emails. The book stated that it was a good idea to send an instant email confirming the reception of a customer request. To me, an email simply stating that my question or comment was received is almost annoying. First and foremost, the webpage viewed after clicking ‘Submit’ should tell you the same thing.

When I check my email in a couple hours, and see a message from the company I’m waiting to hear from, I get excited that my question was received, process, and handled so quickly. Opening up that email and seeing the generic “Thank you for submitting” message really gets on my nerves. Am I alone here? Do you prefer to get a second confirmation that your message was received? Let me know in your comment below, because my curiosity is piqued.

Have you Read This Book?

Have you had the chance to read this book? Did you like it? Were there any suggestions made in the book that you disagree with? As I’ve said I think this is a good book for a quick read, and would recommend it to those both new to Web design and development and someone who has been in the industry for a while.