TL;DR: I’m starting a Web design and development company, Iron to Iron, with a great friend Kevin Richardson. We open shop November 1st and we’re more than excited about it. You can read more about the brand, the name, and our principles on Kevin’s site.

The entrepreneurial spirit is somewhat interesting subject matter for me. In our world, there seem to be two schools of thought. One revolves around startups, funding, and investors, while the other is based on different principles entirely. I can’t say that one is better than the other, because a large segment of our economy is based upon companies being created, purchased, and growing throughout their lifetime.

I’ve had an underlying interest in business for quite some time, and I do my fair share of study and analyzation of companies I’ve come to know and respect, even if it’s from an observation window. I haven’t always had that entrepreneurial spirit, though. I’ve always been one to take comfort in a steady pay check and appreciate the job I’m so blessed to have. That said, however, over the past couple of years I’ve found myself in more and more managerial and business development meetings. I quickly realized that, for one reason or another, I actually had business-focused opinions on all of this. I was excited about the prospect of making decisions that would help set the pace for my company and it was great to watch things unfold over time.

I took hold of this new mindset and continued to study and analyze best practices in our specific industry. I found similarities with other industries and tried to determine what they were doing right, because I recognized that what we do can still be considered “new” and lots of people had lots to say about frustrations in the field. I determined that process was the key to success and winging it & not adapting to lessons learned with every project is a recipe for failure.

The interest continued to build, specifically over the past year or so, and it came to a head when meeting with a good friend. We spent an inordinate amount of time discussing the Web. Design, development, who’s doing what, the client factor(s), and the business end too. We were on the same page since the first day we met, and became increasingly in sync over time.

The combination of my experience in a decision-making, managerial role at an agency and the discussions I would have on a consistent basis planted an idea in my head that I should see what I can really do with myself. It was time to open shop.

My professional desire became refined in college, when I discovered that I wanted to be a professional Web developer/designer, a devigner (or deseloper) if you will. I took my first professional job as a member of a Web Team at a company, working on their website as a student employee. I learned a lot about the working world and office culture there and I was happy to be getting paid to do and learn more about this work I’ve become so interested in. While working there, I stumbled across a job listing for a Web developer at an agency in my city. Some butterflies and emails later, I found myself working at a small shop of around 10 people, working on what felt like a new project every couple of weeks. This is what it was all about for me! My first agency job learning way more than I did in college, using the skills I had been teaching myself for the past 10 years. I was hooked.

I took that position roughly six years ago, working my way from an hourly employee to a position titled Development Director, which I’d compare to being a combination of more descriptive titles such as Lead Developer & Development Manager. The position called for a number of hats to be worn, which is the de facto at a small(er) shop, although the company has just about doubled in size since I started.

I really enjoyed my time there, all six years of it, but I couldn’t help but feel compelled for something different. As many agencies do, my company would work to help clients with entire campaigns, not just their website. When I first started, I really enjoyed the versatility “full service” provided, but my excitement quickly waned and I found myself being distracted from my favorite part: Web design and development.

That distraction quickly blossomed into a feeling of discontent that had me feeling like I wasn’t offering my full focus and attention to my position. I rediscovered my deeply rooted passion for (only) the Web and determined that it was time for something more. I had become comfortable in my position and I didn’t like that. After continuous difficulty in decision making, I concluded it was time for a big change. I wanted to start my own company.

I’m not a solo guy

I’m not quiet or reserved about how much I revere the Web design community. You guys have taught me everything I know and I devote quite a bit of time trying to pay you all back. The knowledge literally floating around our space is invaluable and I know we all recognize that. I would read about the exciting (and often frustrating) lives of the freelancers I respect to the highest degree, and I’d want to be doing that. I didn’t have the desire though, not to go at it myself.

There are many attractive aspects about working for yourself, but I take comfort in knowing that there’s someone else to bounce ideas off of, to rely on, to have faith in. I’m confident in my abilities but I also recognize that I have a focus, leaving a wide array of bullet holes in my comprehensiveness. Finding a partner was not something I took lightly.

I met Kevin Richardson somewhere around three years ago and quickly found common ground with him. There was a lot of it. As time went on and we became closer friends, I realized that he was an extremely talented individual, both in design and production value. We also grew closer on a personal level, and I found him to be a man that I can learn from, admire, and respect for countless reasons. We found common ground in many things aside from the Web and our love for it. We also love God, our wives, outdoor hijinks, and a good brew. Kevin was inspirational for me to not only be hungry for professionalism, but also to be a better man.

We shook hands on starting a company some time ago, and spent nights and weekends coming up with a solid plan for ourselves. Given that we’re both extremely inspired by and focused on the Web (and the Web only), we wanted to devote a lot of time toward talking about the name and brand of our company. It was (honestly) on a paddle boat in New Hampshire when Kevin first spoke the name of our company: Iron to Iron.

The company name is a big deal to us, as it holds a meaning based in our founding principles. Proverbs 27:17 says:

Iron sharpens iron, and one man sharpens another.

We felt that this passage spoke directly to what we want to do with Iron to Iron. Neither of us wanted to head off on our own as a freelancer simply because we value what community has to offer so much. We not only want to work together to do great work, we want to hold each other accountable for being the men we were put here to be, both at work and at home. 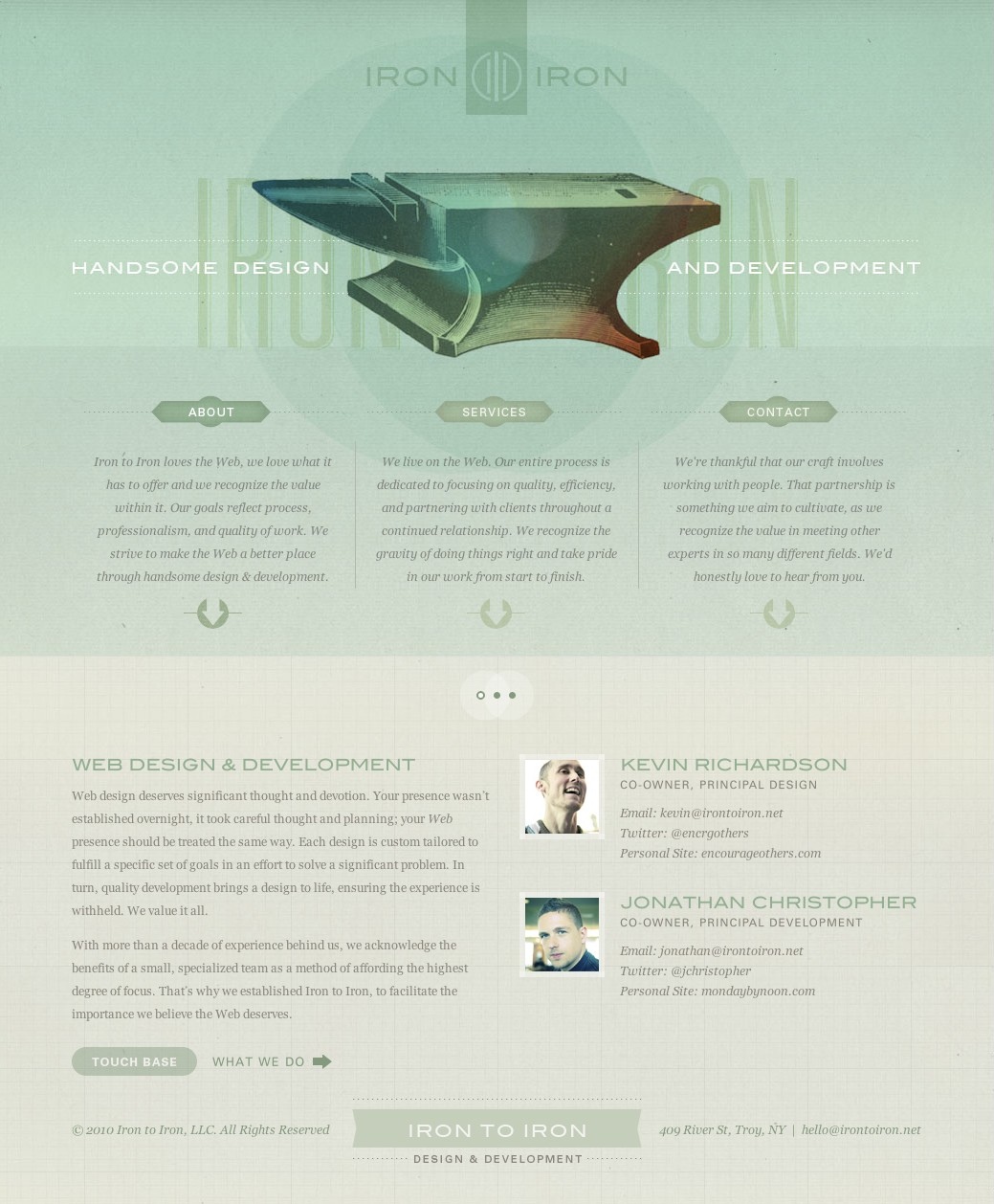 Kevin has (fantastically) written about on the name, the design, and the background of what we’re doing with Iron to Iron. I hope you’ll take the time to read, as the article does a great job in describing what Iron to Iron came from.

We couldn’t be more excited

Both Kevin and I are extremely thrilled to officially open shop on November 1, 2010. We launched the site last week and the reception you all showed us is more than mind-blowing. We read each and every comment on the site (even the negative) and appreciate the time you’ve all given us so much, thank you.

I’d like to thank my wife, Carrie, for all of her undying support in this crazy experience over the past year. I’d also like to thank both Kevin and his wife for being the people they are and also having faith in this gigantic endeavor of ours. I’d like to thank all of our family as well, we couldn’t have asked for a better support network as all the details were worked out, we really appreciate it. I also can’t make it an inch without thanking the Web design community as a whole. The group established there is one of inspirational camaraderie and we’re so thankful for that.