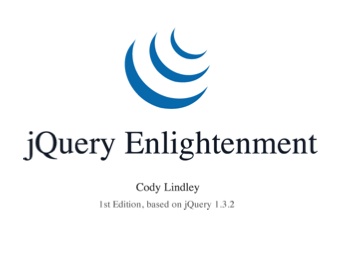 Occasionally a book will come along and reinvigorate my enthusiasm for the format (over my most common method of education: Web based articles). I’ve just finished reading jQuery Enlightenment by Cody Lindley, and I must say it’s done just that. On top of being a ‘traditional’ book as far as the structure is concerned, I also read the book in PDF format, a turn off for most people. I must say, though, that there is something about this book that leaves me confident to say that if you (want to) work with jQuery, you should have it.

Cody Lindley deserves his own section in this review, not only because he’s proven himself to be a great author, but because he is a figure head in the community. I’ve only spoken to Cody here and there, and very briefly, but from what I can tell he’s a great guy, consistently sharing his knowledge with the community, and doing everything he can to both expand and share the knowledge behind his trade.

If you haven’t heard of Cody Lindley, I’m almost certain that you’ve seen some of his work. Cody authored Thickbox, a modal dialog solution for jQuery. He’s very well known in the jQuery community, and rightfully so. I aspire to someday achieve the level of knowledge Cody has not only of jQuery, but to JavaScript alone.

To simply be blunt, seeing Cody’s name on the cover of this book alone convinced me that it’ll be a good read. I knew for a fact that not only would the information be applicable and up to date, it will be based on best practices as well.

I love the aim of this book. If you’ve had an interest in jQuery you know that there is a ton of information out there. I’d go so far to say that the abundance of information in a way works against what jQuery aims to do in that jQuery is so easy to grasp, many tutorials were written without best practice in mind. The approach in this book is different. As stated in the introduction:

jQuery Enlightenment was written to express, in short-order, the concepts essential to intermediate and advanced jQuery development. Its purpose is to instill in you, the reader, practices that jQuery developers take as common knowledge.

That’s only on the eighth page and already I knew I was going to love this book. Instead of jumping right in to code samples, the approach here is to introduce you to the code through the philosophy of jQuery itself. Later on in the introduction, Cody outlines the book at being aimed at three types of readers:

I can see that Cody kept his goal in mind throughout the book, as each chapter caters to all three types of readers extremely well. If you fit into any of those categories, jQuery Enlightenment is for you.

Another great approach Cody took with this book was aligning it with the jQuery API, something you’ll become intimately familiar with as you work with jQuery. As with every API ever written, the documentation can always be improved. That’s not to say I’m not appreciative of jQuery’s API docs, I love them, and I’ve never had a problem finding a piece of information I needed.

This book though, builds on top of the documentation provided directly by jQuery, and walks you through the points that aren’t immediately apparent as you read through the official API documentation, especially if you’re new to JavaScript and/or jQuery.

The other bit I really like about jQuery Enlightenment is the way code samples were included. Cody opted to replicate every snippet on JS Bin. While I often opt to rewrite code samples by hand (I find that it helps with information absorption) I think it’s great that he’s made that effort, especially when viewing jQuery Enlightenment as more of a reference than learning material.

I loved reading jQuery Enlightenment and can’t recommend it enough if you’re at all interested in jQuery. Whether you’re just getting started, or even if you’ve worked with jQuery for years, I’m willing to bet you’ll learn things from this book. I’ve worked with jQuery for quite some time, and I picked up two solid points that I’m going to embrace from now forward, and I’m confident they will improve my usage of jQuery.

I got to this book in my stack of To Read’s a bit late, and as we all know, jQuery 1.4 (and now jQuery 1.4.1) has been released. What does that mean for jQuery Enlightenment? While I haven’t spoken directly to Cody, I can only imagine that he’s in the process of revising the book to include the new greatness 1.4 has to offer. I don’t think you need to hold off for the update until it’s released as this book is a completely solid reference to jQuery, and I didn’t find anything that wasn’t applicable to the 1.4 release. From what I can gather, the revision of the book is going to have quite a bit more content, and be offered at a discount to current owners. All great news!

Again, I absolutely recommend jQuery Enlightenment for your bookshelf if you’re interested in jQuery. It’s one of those books that refreshes my enjoyment of reading technical references and I’m definitely looking forward to the next release.