I’ve been meaning to write this article for the past eight months, but simply haven’t had the chance. With the imminent MacBook Air refresh I thought it timely to take a few minutes to document my MacBook Air experience thus far.

I’ve owned four Macs to date. The first was a Black MacBook circa 2006 and I loved it. Aside from the greasy hand and fingerprints the machine was a slick piece of work and I really enjoyed having it. The one downside for me was the chicklet keyboard, and that very element turned out to be the machine’s single downfall. Towards the end, I lost the N key completely, never to be found again.

That machine was traded in to a Intel Core 2 Duo MacBook Pro, the last of the pre-unibody enclosures. It was awesome too. I wasn’t actively disappointed with the Black MacBook’s performance, but moving up to the Pro was a noticeable improvement. Plus: matte screen.

My next machine was an i7 unibody MacBook Pro with a standard hard drive and 4GB RAM. I outline these specs for comparison with the meat of this article. It was a great machine, my only negative comment revolves around the glossy screen. I’m a matte lifer.

Then came the Air. I picked up my (now current, soon to be ancient) MacBook Air nearly the day they became available; in hand by my first (or second) day at Iron to Iron. There were barely any in stock due to being so new so I maxed one out on the site and waited. Specs are a 2.13 GHz Intel Core 2 Duo with 4GB 1067 MHz DDR3 RAM, SSD (naturally).

I’m a skeptic. Reviewing a MacBook Air as a possibility for a primary machine was no exception. I refused to believe that this axe-blade of a computer could in any way compete with the beastly i7 I was working with. I checked it out in store and I was pleasantly surprised, though. The first generation MacBook Air left a bad taste in my mouth as I heard a number of times that people simply didn’t have the uninterrupted experience I had grown to love about using a Mac. Hard drive issues, fan issues, sleep issues, I can’t even remember the list that had me scared.

Apple made it clear though, that this version was reworked. The presentation of the new model (and the price point) had me super curious as to whether or not it’d be feasible for my workflow. The two biggest benefits that kept me interested was the compressed resolution and the SSD.

My focus of this piece is to outline my experience using a MacBook Air for my professional workflow: client-oriented Web front and back end development in OS X. My workflow involves the use of many tools, some of which overlap with a strictly designer’s workflow, so perhaps my perception will be useful to designers (only) as well. I’m going to skip the general applications such as email, instant messaging, media, and the like simply because there are countless reviews outlining “average use” of a MacBook Air — in short, it’s awesome for that.

The kicker for me, though, is that my MacBook Air is the best Mac I’ve ever owned, hands down.

My development process begins in Photoshop. I’ll receive final client-approved PSD comps from Kevin and work on static versions. Normal interaction with Photoshop is spot on with past machines if not a bit quicker, thanks to the SSD. Site asset generation from PSD to static files is overall surprisingly performant, and I expected it to be a bit more of a burden than it’s proven to be.

Photoshop is slow by nature, and I would put the Air’s handling of well designed site comps on par with the i7. I’ve heard from some other Air users that they do notice some slowdown when working in Photoshop, but it was likely due to the machine being the 1.8 GHz variety with 2GB RAM. Those specs are limiting for any machine running Photoshop. 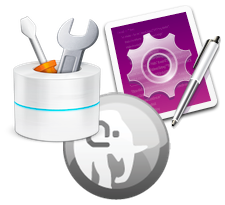 I’ve been dabbling in tons of tools over the past year. Of course, without fail, I’ve stuck with TextMate for the foreseeable future, but consistently keep an eye on Sublime Text 2. Just a few more feature ports and I’ll be good to go there.

In addition to an editor, I’m running a local development environment via MAMP Pro and everything is lightning quick. I’ve got various SVN and git repos working at all times, and I’ve yet to see a bottleneck in the code space. I’ve also taken a step further in development by incorporating Xdebug into my workflow where appropriate and there’s not a shadow of performance degradation there either.

I’m also doing more and more work with MySQL directly via Sequel Pro and it’s marvelous. The code I write isn’t ever compiled so that’s not something I find myself doing too often (if at all) so I can’t directly comment on performance there, but logic tells me it’d conform to the other experience I’ve had with the Air.

Overall, writing code should be a really speedy exercise and the Air facilitates that. Not to say that the actual inspiration of the code should come quickly, but the physical interaction itself should be, and is.

My overall reaction to the Air in comparison to my recent i7 MacBook Pro is that performance difference is negligible. SSDs make a big difference. I imagine that if my i7 had an SSD, my resolution would be a bit different. I feel though, that comparing a MacBook Air to an i7 speaks towards what the Air is, and what it’s to become.

As I mentioned, one of the largest draws to the Air for me was the compressed resolution. My 13″ Air has the same resolution my 15″ MacBook Pro (1440×900) and I loved that. I’ve always loved the 13″ form factor, but the smaller resolution always felt cramped. This seemed like an ideal solution. 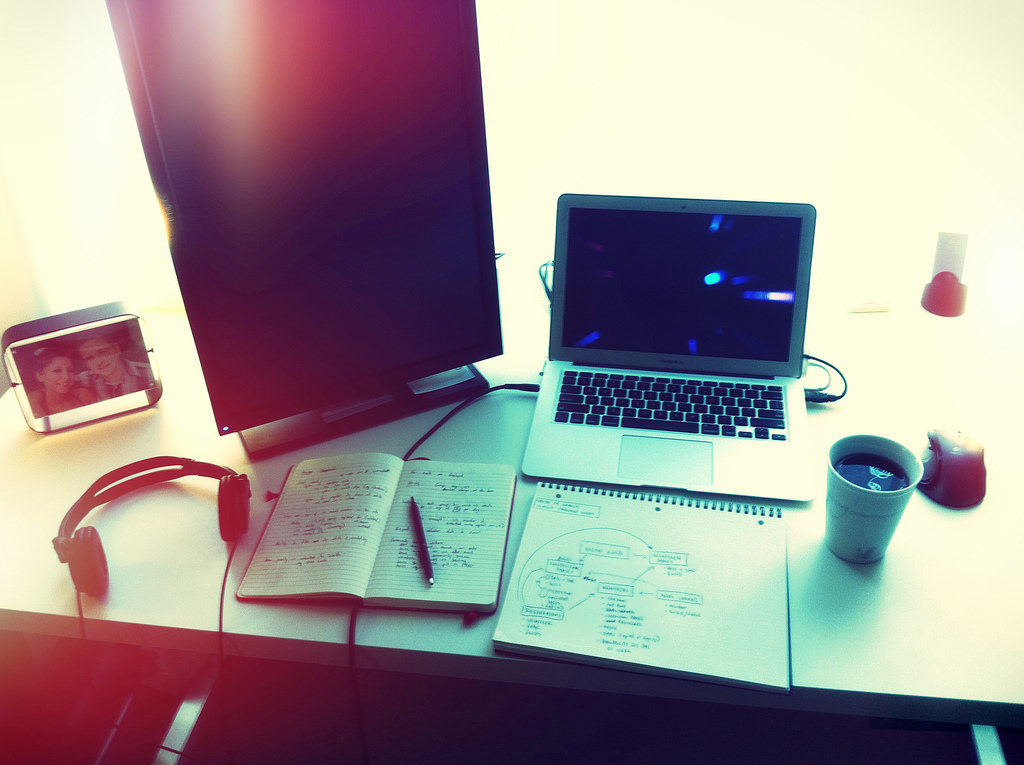 While the boost in resolution is awesome as expected, it took some getting used to. Not in that the pixel density was hard to grasp, but I use an external monitor, and seeing a design on one monitor versus the other plays tricks on your eye. I’ll have Photoshop open on the Air’s display, working on the comp, and my browser on the external monitor. I’m constantly shifting from one to the other, and it absolutely took some time to get used to the difference. For the first few days I was repeatedly checking font sizes and image dimensions to make sure they were accurate. That tendency has since subdued and I’m more used to the difference now, but it’s something to be aware of. Additionally, there are times when moving windows around the secondary display shows the onboard graphics. Things get a little jittery should you move windows around quite a bit, but it’s really quite temporary and nothing to earn a demerit.

On an average day I’ll simultaneously be running a number of applications, a common group of which include:

I’ve yet to notice any lag, especially when comparing performance to my i7 MacBook Pro.

An unexpected benefit for me was portability. I don’t travel too much but I’ve gone on a number of trips since November where the Air’s shine was glowing. I’ve been a laptop guy for the past 6 years or so, but never really enjoyed a lasting battery. Finally, with the Air, I was able to get a staggering amount of work done before realizing that I wasn’t plugged in to a wall. In addition to the battery life, the form factor is just the right boost of awesome. Laptops haven’t been “large” in many years, but I’m now completely spoiled by the dimensions of this computer. It would be disappointing to have to move back to a 15″ machine after getting used to the Air.

In addition to my professional work, I also use my Air for a number of other things you may be interesting in comparing. I try to shoot photos with a Canon 7D, an 18 megapixel DSLR that generates ~30MB RAW files and I process these photos in Aperture 3. I tested Aperture in store and noticed that the sample photos were of a large size, but I was convinced (and not blaming that) Apple had used optimized assets in an effort to ‘wow’.

After working with 18MP RAW images in Aperture 3 (and Lightroom) for nearly the past year, I can say that the SSD helps bigtime. The MacBook Air is able to edit photos on par, if not a bit quicker than my Intel Core 2 Duo MacBook Pro (non unibody) could. The one reportable outcome is that the fans work hard when processing assets that large, and that always makes me nervous as heat and electronics don’t mix with a positive outcome. I tend to do my post-processing of photos using a ‘scratch’ library I’ve set up on the SSD itself, and once that work is done, I’ll import that library into my main library stored on an external hard drive. This process has worked well, but dedicated graphics would be great in the future.

With all of the good, there are a few niceties that I’d love to see in the possible MacBook Air refresh due this week. First and foremost: I miss the backlit keyboard. This is not something I expected as I came to take it for granted, but for those nights where I feel like doing some work from the living room couch without full room lighting, I’d love the benefit of a backlit keyboard. This update seems likely as of some recent news, so that’s awesome.

The other major hardware change I’d love to see is an option with dedicated graphics, even if that meant a bit thicker of a form factor. It’s not something integral to my professional workflow, but for those times when I’m processing photos or transcoding the occasional video, the boost in performance would be welcomed. I do my fair share of screencasts so not having the processor cranking and fans whirring for extended amounts of time would be great.

So there you have it; using a MacBook Air for Web development. Again, it’s the best Mac I’ve ever owned, for both professional and personal use, and I will look forward to upgrading to a new Air when the time comes. It’s that blend between a professional notebook and a portable netbook we’ve all been waiting for. The new Air’s are going to sell like crazy.