This past weekend I was finally able to sit down and read my way through Rockstar Business by Adii “Rockstar” Pienaar. If you haven’t heard of Adii Rockstar before, he’s the main man behind such companies as WooThemes, radiiate, the Rockstar Foundation, and others. To say that Adii is a busy man seems to be quite an understatement from my viewpoint, and I’ve never met the man.

WooThemes, though, has been a large inspiration for me. In my eyes, a lot can be learned from WooThemes, not only because I live and breathe WordPress just like that company does, but because they seem to be ahead of the curve and setting trends on a consistent basis. Every time I read about what that company is doing I think that it’s a solid decision and I can’t wait to see what comes of it. It’s rare to be able to follow a company for a lengthier bit of time and not notice any honest-to-goodness hiccups along the way.

It’s hard to learn about WooThemes without hearing about Adii, and such was the case with me. I’d follow what he was doing because his personal brand was smart too. He was hiring big name designers to help propel his presence in the design community and it was working for him. The “Rockstar” mantra was already in full swing when I first started reading from Adii and it was obvious that he had a particular way of going about life and business.

Needless to say, I was intrigued about Adii’s thoughts on the subjects, and when he announced his first book I was quick to take a closer peek. I’ve always had an interest in business; particularly an interest in Web-based businesses. The low barrier to entry has every market flooded with businesses looking to make a quick buck, but only the passionate ones survive. Adii’s businesses seem to be thriving, and I was looking forward to getting some insight on that. 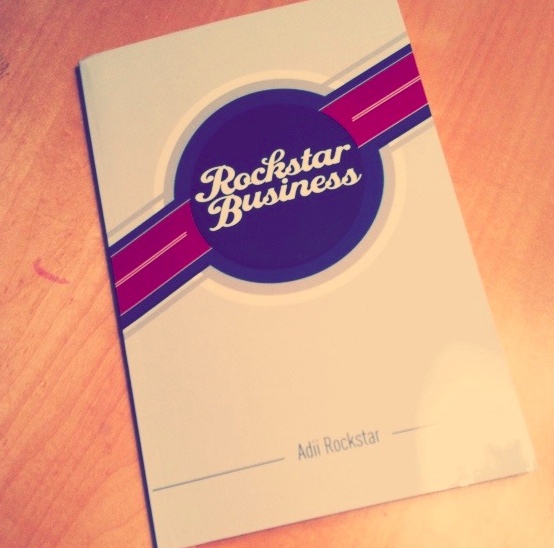 I wasn’t sure what to expect when I originally read about Rockstar Business. It’s self-described as

So my first thought was that the book may be much less business oriented, and maybe something more like The Four Hour Workweek. That’s okay, there were a number of things I took home from that book, and a new angle on something like that should provide some good advice. As I began reading though, it seemed like Adii wanted to make a point that Rockstar Business was in fact designed to be completely different than The Four Hour Workweek. As I read through Rockstar Business I was convinced that Adii does in fact have his own unique way of approaching life, and it is a bit different than Timothy Ferriss.

Adii is attached to the phrase Rockstar in a big way. He speaks to great lengths about where it came from and that it’s a mindset, a philosophy, and something he’s become very comfortable and identifies with. I will give a bit of a warning; if you have distaste for the phrase, you’ll likely not be able to put it aside in an effort to make it through the book. It’s rare that a paragraph sneaks by without mentioning “the R word” and it’s without a doubt the focal point from cover to cover.

I must admit that I’m not in love with the term ‘Rockstar’ and I don’t believe I’ve ever so much as typed it until it came to this book review. The term has a stigma of cockiness, how could it not? A lot of people are turned off by overconfidence but Adii ran with it. Adii does his best to explain that’s not how he views it, that the rockstardom he’s defined for himself closely parallels itself with professionalism and sound business practices with a touch of vision and risk. I actually found myself replacing the occurrences of ‘rockstar’ in the book with the word ‘Web professional’ as I read.

Adii offers a lot of advice throughout the book. I’ve got to say that it’s really sound advice, most of which focuses on not becoming a pretentious success, contrary to the weight the word ‘rockstar’ carries. Truthfully, that was a relief to hear. I knew before buying the book that even though Adii has branded himself a Rockstar, he doesn’t carry himself around like he’s better than anyone else. Although I’ve only corresponded with Adii a time or two, I’ve heard nothing but great things about him, his personality, and his businesses. The times I have reached out to him he’s been responsive and timely. He touches on the importance of that in Rockstar Business.

Adii speaks a lot about finding the right people to work with, something really important to cultivating good work. There are a lot of people in our industry out there to make money and that alone. A big part of Adii’s vision is that ‘Rockstars’ care. They don’t spend all day looking at numbers and how to make them grow, Adii stands behind curating what happens on the bleeding edge, and to me that’s inspirational. There’s nothing worse than a business owner that hasn’t a clue about their business and instead depends on others for their greatness. It seems like Rockstar Business is an antithesis to something like that ever happening; I like that.

Much of the book surrounds brand. Brand yourself, brand your business, brand everything. Adii explains that it’s much more important that the right things be said about you and what you’re up to and the best way to get that done is to focus on it every day. I’m a big proponent of that as well. Adii explains his reasons behind doing so and I agree. You need a name for yourself, your company needs to stand on its own two feet. Coat tails can only be ridden for so long and it’s important that you’re active and involved.

Rockstar Business is a quick read. I went through it in about a single sitting and it’s easy reading for the most part. That’s a good thing. I must say though, that if you’re not used to (and acceptive of) the “rockstar” mantra, the book may in fact be difficult to get through. Again, I only say that because I share the skepticism of many that someone can be a rockstar without the baggage that comes with it. I think that’s entirely part of Adii’s angle, though. He’s set out to destroy the stigma by doing what he’s doing and from what I can see, he’s doing it well.

Adii will definitely continue to inspire me, specifically as I continue with my company as well as projects like Monday By Noon. The fact that he’s my age, running multiple successful companies, and has already published a book is definitely inspiring. If you’re looking to pick up a positive vibe for your entrepreneurial spirit, I say give Rockstar Business a read.

As has become the tradition around Monday By Noon, I picked up a second copy of Rockstar Business to share with a reader. I like paying it forward, especially with books, because this community has provided so much knowledge for me, the least I can do is pass along a book from time to time. That said, if you’d like to get your hands on a free copy of Rockstar Business by Adii Rockstar, we’re going with the Tweet entry method this time around. To enter, just tweet the following:

Entries are open for 7 days and will close at 11:59pm Eastern on November 28, 2010. The winner will be announced the following day. I’m sorry to say, but unless you’re willing to pay shipping, the contest is limited to those living the continental US. Each entry on Twitter will be counted once and only once. Good luck!