Usability testing is important. I’m willing to bet, however, not many agencies or freelancers consistently partake in usability testing, unless that’s what they do. Why is that?

Lack of client knowledge
It’s extremely rare that I’ve had an interaction with a client where the phrase ‘usability testing’ doesn’t garner an inquisitive look. At the very least, mentioning usability usually sparks an interesting dialogue, but it’s often the first time clients have heard of such a thing. That also mean it didn’t make it into the budget for this project.
Client assumption of expertise
If a client does understand the purpose and value of usability testing, they may be curious why you’d like to have usability testing sessions on their website if you’re a professional designer. If designing websites is your profession, why should you need to test your design concepts? Shouldn’t they work already? Why should we pay for that?
Where’s the value?
In my personal experience, usability testing, unless requested, is often an addition to project scope that clients aren’t willing to pay for. Unfortunately, client bias as far as their experience on the Web often has detrimental effects on their interface design when they begin to direct the project a bit too much. It’s at those times when a usability test would come in like The Dark Knight and save the interface once and for all.

While that list is extremely truncated and narrow, it gently sums up my experience with usability testing client work.

Fortunately, a negative response to usability testing isn’t completely consistent. From time to time a client will come in fully versed in the importance and value of usability testing. It’s a pleasant surprise to hear a client say they’d like to integrate testing into the process as a way to ensure their product will perform to the best of our ability.

The process of usability testing itself can be put together a number of ways. Much of the time, a usability test will be conducted in a closed room. The user being tested will sit at a workstation with an instructor, who will request certain actions from the user and observe his or her method of completing that request. The computer screen is recorded using additional software on the computer, and the interaction between the test subject and instructor is recorded with a video camera.

The process is quite basic, but the knowledge gained is invaluable. Viewing the footage from the camera in sync with the screencast from the computer will bring design flaws to the surface for examination. Compensating for weakness in the design and repeating the test helps to create a much more effective interface.

Silverback first hit the Web boasting a unique site and a killer application icon. The design itself quickly made huge waves among the design and development community, a genius move. No one had any concrete information on the purpose of the site, but we were drooling already. We knew Clearleft had something very interesting up their colelctive sleeve.

What does Silverback do?

My favorite applications do one thing and do it well. Silverback will be one of those applications. The website follows the same path by explaining the purpose of Silverback in a short, to-the-point list:

Silverback fills a niche market of designers looking for a quick and easy way to conduct usability tests that will integrate easily into a workflow. Silverback is it. 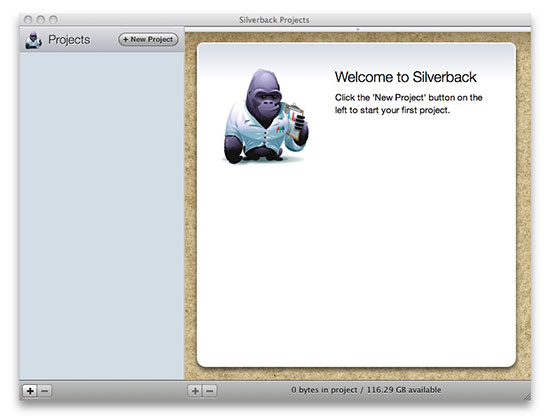 Silverback is an application that doesn’t need an instruction manual. While the feature set isn’t extensive, the application follows a natural workflow allowing you to easily discover application use within a few seconds. 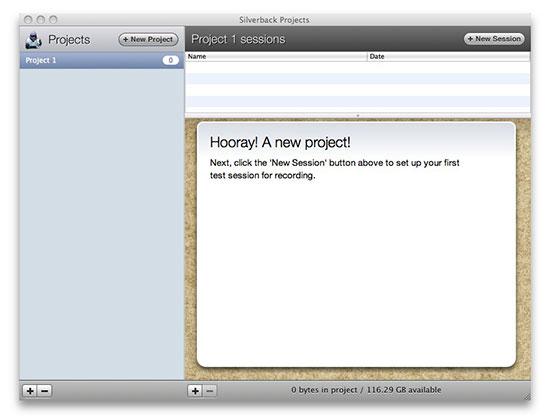 After creating a new project, you’re able to begin your test sessions. Each session is logged for future reference. 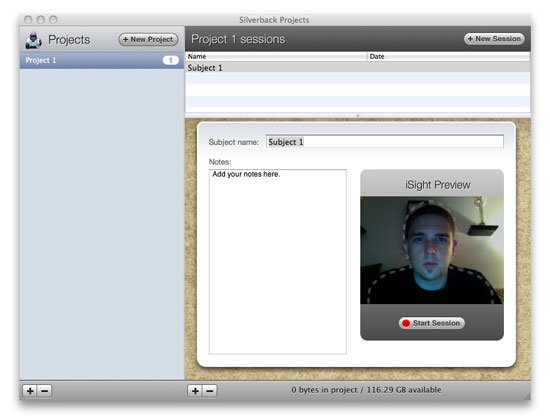 Before each session begins, you’re able to ensure the camera used to record the user’s face is properly positioned. You can also record the users name as well as any notes you have about the session. After starting the session, the screen will blank out in preparation for your subject. 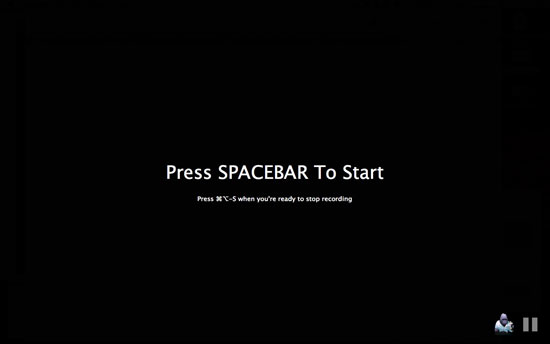 A straightforward instruction screen is in no way intimidating to your subject. 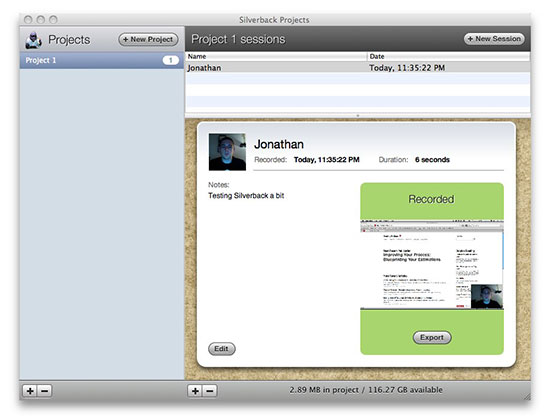 Sessions are neatly organized for future reference. It really can’t get much easier than that. If applicable, you’re able to easily export any session. You can set a number of options, including the size and position of subject footage.

Another great thing about Silverback is the slick integration of the Apple Remote. Using the remote, you’re able to interact with the recording behind the scenes. You’re able to insert markers in real time, allowing for quick navigation of an exported QuickTime composite. I think that’s a great idea and fantastic example of ingenuity.

In my opinion, Silverback is offering an extremely low cost, effective solution for many designers. At $49.95, you would be hard pressed to find a better option for Mac at this point. A big congratulations to the group at Clearleft for a job very well done. I’m very much looking forward to improvements made in the software.