A much more passive way of collecting data like this, specifically for Web designers, is checking out heat maps. Heat maps don’t require fancy head gear or an appointment. Best of all, subjects don’t even know they’re being tested. Heat map testing is nothing new to Web design, in fact I remember playing around with Crazy Egg back when they first launched.

There’s a new kid on the block, though. Trailhead is heatmap visualization for $10. It’s obvious that their purpose is simple and straightforward:

Just how I like it. I quickly signed up for the ‘little’ test yesterday and I’m about half way through the heat map generation for MBN’s home page. Already I see some flaws I need to tackle: 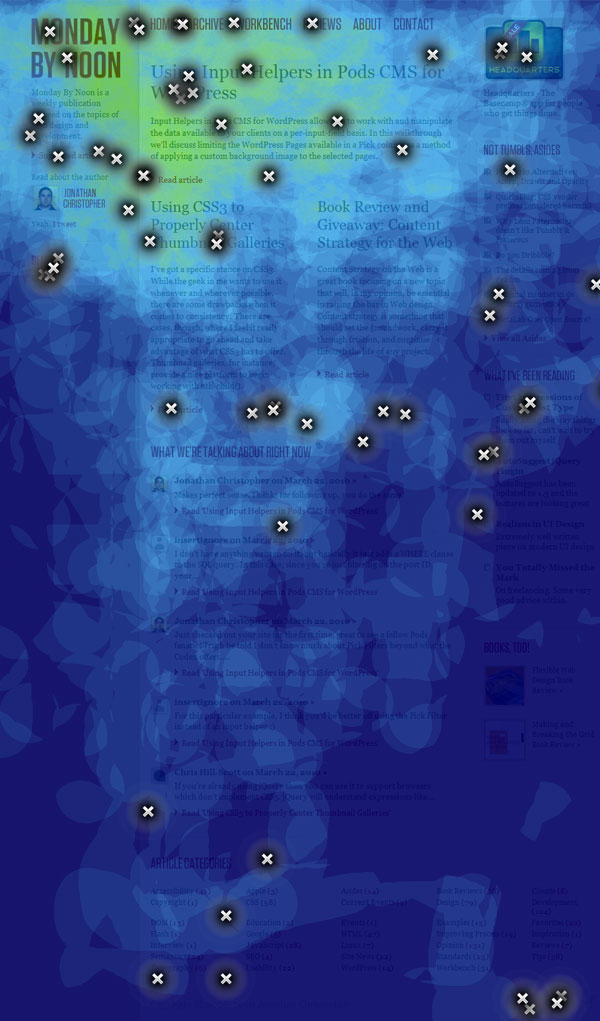 It’s great that people are using the sidebar, I was hoping that was useful. They’re also using the main navigation which is great. On top of that (and it’s no surprise) people are hitting Fusion. It’s nice to see that the clicks are spread out, and that people are actually scrolling the page.

If I had to categorize a fault, it’s not that of Trailhead. The sidebar with this design is set to position:fixed which causes some problems with tracking. On top of that, the site isn’t perfectly centered or left aligned. There are some min-width and max-width values set which provides a semi-elastic semi-liquid layout that I can’t possibly expect Trailhead to account for. That said, some of the clicks appear to be nowhere when in fact a link was probably hit. This isn’t really Trailhead’s problem per se, but it’s something you should keep in mind with this sort of metric analysis.

So far I’m loving Trailhead and I really like the pricing model. It takes about four seconds to sign up and start a test and I suggest giving them a whirl if you’re looking to get some honest feedback about where those mice are really going.