I have always felt that case studies are a fantastic tool of explanation. Personally, I seem to grasp new information more effectively when a case study is used to back up material previously covered. Web Standards Creativity is a book comprised of effective case studies put together by some of the best designers/developers in the industry. 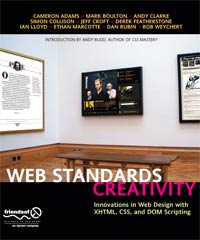 The first thing that struck me about this book was its physical appearance. The entire book is full of color, with pages including lots of imagery and various color themes. It is definitely a fantastic looking book, but the aesthetics at some points are sometimes overbearing. At certain points, it was quite difficult to read the text as it was placed on a background image with text or code in it. On top of that, there were also some contrast issues which caused me to bring the book a bit closer to make out what was being said. At the end of the day it’s nothing show-stopping, but definitely noticeable at some points.

Each chapter is written by a separate author, a name you’re more than likely very familiar with. Cameron Adams, Mark Boulton, Andy Clarke, Simon Collison, Jeff Croft, Derek Featherstone, Ian Lloyd, Ethan Marcotte, Dan Rubin, and Rob Weychert, with an introduction by Andy Budd. These authors are some of the most respected names in Web design and development, so I was really hoping for something great.

The first chapter, written by Simon Collison outlines his process when putting together a website for a band. Applying a creative presentation to a solid foundation of semantic markup is the topic of conversation. Many up-and-coming designers and developers will catch on to a number of tips provided in this chapter.

Chapter 2: Taming a Wild CMS with CSS, Flash, and JavaScript

Chapter two is written by Dan Rubin. He walks us through his entire process of putting together a website for the band Lifehouse. The chapter begins with some background information about the project. Dan explains the contraints he faced with the required CMS, and details his escape. His entire process is outlined, from thumbnail sketches on paper, to final implementation. He also includes his reasoning for using each of the various techniques he employed while putting the site together.

Chapter 3: New York Magazine: My, What a Classy <body>

Ethan Marcotte outlines his unique process in the third chapter. He has used this case study of New York Magazine to help describe one of the many techniques of putting together a column-based layout. Like other chapters, there is a lot of code to check out in this case study, including effective ways of handling any quirks you’ll run into when working with Internet Explorer. Ethan also offers great tips surrounding the benefit of using a class for your body in order to easily achieve alterations to your overall design.

Chapter 4: Designing for Outside the Box

Chapter 4 is a great walkthrough from raw markup to a finished product. Written by Andy Clarke, this chapter really focuses on the gritty details of building a website design from the ground up. After walking us through the markup development, Andy shows us his toolbox of CSS techniques to beautify his XHTML. Like all of the other chapters of this book, there are a great number of tips to be learned by developers and designers alike.

Chapter 5: Creative Use of PNG Transparency in Web Design

PNGs are sometimes underrated and Jeff Croft knows it. He dedicated all of chapter 5 to this great image format, explaining both the pros and cons surrounding it. Comparisons to other formats widely used on the Web help to solidify his writing. Jeff uses some real-world examples to help support his stance, and shatters and misconceptions about a blatant lack of PNG support in Internet Explorer. Going further, Jeff outlines some really creative uses of PNGs to help with design longevity taking advantage of the unique alpha properties the PNG image format provides.

Chapter 6: Grid Design for the Web

Grid-based design is the topic of conversation for chapter 6. Mark Boulton compares and contrasts grid design in print and its application on the Web. He offers a complete walkthrough of a grid-based site design from sketches on paper to final implementation. Some great techniques are included which assist in creating a solid grid-based layout from the first CSS declaration.

Typography is a huge part of Web design. Rob Weychert outlines some of his choice techniques of using CSS to empower the typography of a sample website based on Edgar Allan Poe. Rob begins with a brief history surrounding typography, and explains how you can apply certain elements to the Web to enrich the overall look and feel of your design. He outlines some of the issues you’ll run into when testing in various browsers (including Firefox) and shows us how to effectively handle them.

Chapter 8: Print Magic: Using the DOM and CSS to Save the Planet

Ian Lloyd walks us through a really interesting example using JavaScript, the DOM, and CSS to provide a document which can print only a single section of content as opposed to the entire piece. While you can do a great many things with a print style sheet, Ian describes a certain circumstance where simply hiding a few elements not suited for print still doesn’t solve a problem of printing too much information. His process is well documented using a sample implementation, and he follows up by displaying this example in the real-world situation that inspired the functionality.

Chapter 9 is all JavaScript all day by Cameron Adams. The chapter outlines the creation of a customizable interface and resolution-dependent layouts. There is a lot of JavaScript in this chapter, and you’re almost sure to catch on to a few tips throughout.

Derek Featherstone describes accessibility concerns when dealing with enhanced navigation functionality. After a fairly general overview of the goals of accessible Web design, the chapter describes the creation of an accessible navigation which is progressively enhanced to provide some eye candy where applicable. Following suit with his co-authors, Derek begins with explaining his reasons for markup used, continues by applying CSS, and finishes with JavaScript.

After reading this book, I was able to sit back feeling as though I just had ten one-on-one workshops with some of the greatest guys in Web design and development. While you may be put off by the fact that every chapter is written by a different author, their voices truly came together throughout the book. Each writing style, while unique, was truly effective and very easy to read. There is an abundance of code to back up the topic of each chapter, and you’re sure to walk away with a significant amount of knowledge.

While some of the content of the book may be introductory, I’d definitely recommend the book to just about anyone who designs or develops for the Web. There is a wide spectrum of tips and tricks to be read, and you’re sure to learn at least one thing. If not, at the end of the day you’re left with a great looking book to have in your library.