It’s Been Quiet, But a Lot Has Been Going On

Two big things have taken place on the site as of last week, and I’d like to take some time to talk about what’s different around Monday By Noon.

I’m really pleased with the changes that have been made, especially given how quiet it’s been around here lately. More on that scattered throughout the coming details.

I’ve just pushed live the first design revision to Monday By Noon since it’s debut nearly two years ago. I can’t believe it’s been almost two years already, but I’ve had the gnawing desire to completely redesign for at least the past six months.

There isn’t a whole lot that’s new aesthetically, but the take home message is that the design is now responsive. Admittedly, one of the core reasons I wanted to redesign entirely was to incorporate responsiveness. A secondary reason was to take better advantage of @font-face. Both have been accomplished, but it’s far from a redesign. I wouldn’t even go so far as to consider it a realign. It’s more of a refactor. 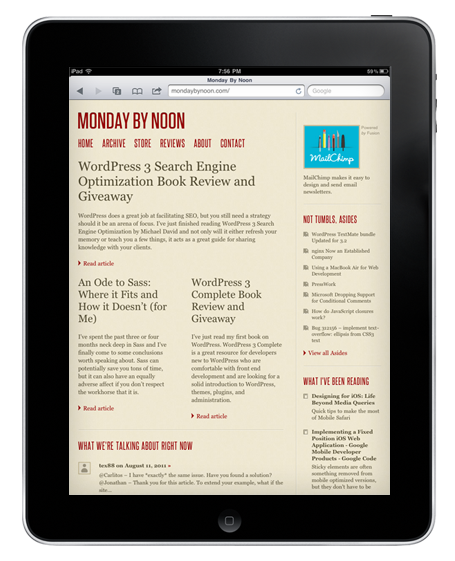 I took a realistic look at what it would take to redesign Monday By Noon. Professionally, I’m a developer with a very strong interest in design, so coming up with a completely new design isn’t something I would classify as ‘easy’ for me. Inspiration is very sporadic, and it’s often short lived.

I began experimenting with some structural wireframes I thought would translate well into a nice looking responsive design that was equally usable as it was nice to look at. Coming up with the structure came pretty quickly. It was nothing ground-breaking, but the responsiveness had me excited about the direction I was headed. Unfortunately, creative drive stalled out around then and I eventually tossed everything to the wayside.

Upon re-examining the current design of MBN, something clicked and I realized what I had in front of me. I decided it best to simply rewrite the structural CSS in an effort to make it responsive; things came together like a jigsaw puzzle. To date, I’ve implemented about five ‘levels’ of responsive adjustments, and have a ton of work left to do, but I like the direction.

As of now, there’s something about the portrait iPad version that brings a smile to my face.

There’s more tidying up to do than I can handle thinking about, so I’m not only calling this change a refactor, but a ‘live’ one at that. I’ll be making updates hopefully as frequently as I publish (more on that later) and tweaking things per-environment as time goes on.

It’s funny to think that not even two years ago, @font-face was just beginning to take a grip on all of us. I was (and still am) smitten with Tungsten, but the main nav links & headlines on the site have been converted to Steelfish, a free font from Typodermic. I think it gets the job done when used for my headlines, so I went with it.

Things have been quite busy at Iron to Iron. Kevin and I took some time to begin scheduling a seemingly endless list of side projects we want to accomplish over the next few months. The first item on that list was releasing our public portfolio which we were able to launch a couple weeks ago. The next item on the list was exploring the WordPress plugin space a bit more.

Hopefully you’ve had a chance to have a look at Attachments, one of my most popular plugins that’s been under consistent development since late 2009. The plugin was created from a personal need on nearly every client project I built, and has become useful to many other WordPress developers as well.

Throughout it’s existence I would of course receive a number of feature requests. Many of the ideas were really great, and beyond that I had my own list of things I was determined to add. Time, of course, was the biggest limiter. I loved working on the plugin, but wanted to do more. I sought out to build in a number of the most requested (and most needed for me) features and try our hand at a separate branch of Attachments; Attachments Pro. Attachments Pro brings a number of commonly requested features, including:

I’m really excited about these updates, and think that long time users of Attachments will love them. It took some time to get the features built in, and I’ve got a lengthy list of things I’d like to continue adding. The Store aims to help offset the issue of trying to find time to facilitate further development of Attachments, Attachments Pro, and other existing and future plugins.

I’ve got a number of other Pro series plugins in the works, but they’ll all follow the same workflow as Attachments. I love WordPress, I love the community, and I love open source. I plan to continue contributing to free and open source projects for as long as I can. In order to better facilitate that development time, however, I’ll be creating Pro versions of many of my plugins and offering them here.

The plugins in the public WordPress repository will embrace the core purpose of each plugin, and the Pro versions will append additional features and other enhancements not available in the free version. I feel this strikes a balance between giving back to the WordPress community as well as facilitating future development for all of my plugins and the plugins I contribute to.

With the Iron to Iron side projects now in full swing, I’m making it a point to not let my focus slip with Monday By Noon. Unfortunately, with trying to get everything in motion and at the same time staying on top of client work, post frequency around here has all but fizzled out over the past few months. I hate that.

While it’s true that writing a 3,000 word article is no small feat for me, I’d like to keep writing consistently by better utilizing my Asides. Every post helps the effort to better spread the news about the latest and greatest in Web design and development, even if it’s little more than a sentence or two about a link.

I read about new great stuff every day I sit down to work, and I post my long form thoughts here because I enjoy this community so much and I want to do my part to contribute. Based on my poor performance in 2011 I can’t say for sure that feature-length articles every Monday By Noon are feasible. I’m going to do my best to make up for that, though, by continuing to write only when I’m able to dedicate enough time and effort to the piece. I don’t want to post for the sake of meeting a psudo-deadline, but instead when I have time to encompass an idea in its entirety. Throughout that downtime, though, I should continue to post, it’s not an excuse.

I’ve got my article idea list in my back pocket, and I’m adding to it all the time. I’ve got a lot left to say and I’m definitely going to pick one piece off after another, it might just not be every single Monday By Noon. I’d like to close in thanking everyone for continuing to read what I have to say. I can’t stress enough how much I feel that you, the readers, are what keep MBN relevant and I’m so appreciative of that.

So have a look at MBN in your browser, check it out on your mobile device, and definitely check out Attachments Pro when you can, I’d love to hear what you think!